Few societies are as well mapped-out on film as Japan. Japanese filmmakers are at least as widely known outside Japan as its authors: just as Tanizaki, Kawabata and Oe have been celebrated abroad for their writing (with each of them winning the Nobel prize), so Ozu, Oshima and Kitano have given Japan’s faces, its landscapes and its history to the rest of the world. And no other Japanese filmmaker did this as well or for as long as Akira Kurosawa. For 40 years, between the awestruck surprise that greeted Rashomon (1950) in the West  to the almost accustomed pleasure with which Dreams (1990) was embraced, Kurosawa seemed to move from strength to strength. Nothing could be further from the truth.

Thanks to the ever-suspicious bias of Japanese producers (who, after all, deprived us of Ozu’s genius for decades because they believed he was “too Japanese”), Kurosawa’s success in the West was regarded suspiciously as some sort of fluke. Despite his unarguable success, Kurosawa was, in fact, one of the greatest risk-taking filmmakers in the history of international film (many of those risks, I might add, didn’t pay off). Every one of his world-renowned films was either preceded or followed by a film more experimental in form or more difficult. You can even argue that some of his greatest successes (Rashomon, Ikiru [1952], Seven Samurai [1954]) were enormous risks for Kurosawa’s career – the ones that did pay off. This may sound strange, given that Kurosawa is now often remembered as something of a reactionary, rear-guard director (especially in Japan). But aside from the uncanny sense of what audiences wanted, there is a persistent experimental thread running throughout Kurosawa’s work. 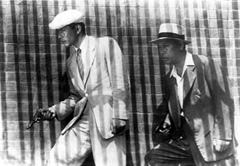 If one discounts his first films, with which he sought to establish his career, Kurosawa’s first recognizable masterwork, Drunken Angel (1948), was also a daring (for the postwar “Red Scare” era) social document, foreshadowing Ikiru in its portrayal of the often futile efforts of a crusading (dipsomaniac) doctor – played by Takashi Shimura, who also played Watanabe in Ikiru – to get a mosquito-spawning stagnant pool drained in a benighted corner of a Tokyo slum. That was followed by a melodrama, The Quiet Duel (1949). Then Kurosawa made Stray Dog (1949), an edgy, brilliant portrait of a cop’s search for his stolen pistol one hot Tokyo summer. That was followed by a rather mawkish expose of Japanese tabloids, Scandal (1950). But his next film, Rashomon, cemented his reputation, with audiences and critics, if not with producers. And Kurosawa never had to look back.

Fifteen years and eleven films later, Kurosawa was both a critical and commercial god, thanks to one or two “greatest films of all time” in the interim (one of which is the quite humbling macho film of all time – and who am I to argue? –, Seven Samurai.) Once ensconced, however, he entered the darkest and most difficult period of his career. Not caring to be categorized as the superannuated director of samurai satires, such as Yojimbo (1961) and Sanjuro (1962), all of his films from 1965 to 1985 (of which, amazingly, there are only five) were potential career-ending gambles, and the Japanese film industry, which was undergoing the first of several transitional periods, was particularly unforgiving toward them.. 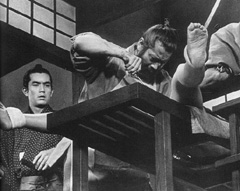 Red Beard (1965) was a drastic investment of time and money for Kurosawa (the production was such a strain to his customary hero – for 16 films – Toshiro Mifune, that he had a falling out with Kurosawa and would never again appear in one of his films ). Despite the film’s critical acclaim, Kurosawa spent the next five years trying to get a project – any project – off the ground. Dodes’ ka-den (1970) – Kurosawa’s first color film and a daring stylistic reach for the artist – had the unfortunate fate of being jeered at by most Japanese critics. Kurosawa was so shaken by the film’s reception that he attempted suicide.

Due to the freshly remembered excesses of Red Beard (like deliberately taking two years to produce so that his actors and sets had the necessary lived-in effect that he wanted) and the off-beat unpleasantness of Dodes’ ka-den (whose eccentric characters inhabit a garbage dump) Kurosawa was considered so “un-bankable” by Japanese producers that he had to go to Soviet Russia to make his next film, Dersu Uzala (1974). Despite more awards and accolades, which were coming so thick and fast to Kurosawa that it must have exasperated producers who saw him only as a spendthrift maverick, Dersu was followed by another six years of drought. Finally, Francis Ford Coppola and George Lucas, longtime Kurosawa fans,  approached him with an offer to finance a film. Kurosawa characteristically suggested a long-cherished project – Kagemusha (1980) – and got backing for it. Oddly enough, when the film was finished, Coppola and Lucas asked for cuts from their oft-admired master, thinking the esoteric story, set in pre-Tokugawa Japan, would swamp an American film audience. To appease these quizzical admirers, Kurosawa snipped 20 minutes from the film and it was released in the West to more fanfare than had accompanied any Kurosawa film since the early ‘60s. 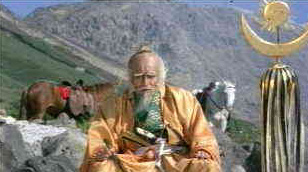 Nevertheless, the cost of the production was so withering to Japanese producers  that Kurosawa had to resort to further foreign investment – this time from France’s Serge Silberman – for what is certainly his ultimate statement as an artist, the dauntingly grave transposition of Shakespeare’s King Lear to medieval Japan, Ran (1985). This film stands in Kurosawa’s work as Otello stands in Verdi’s – a final, magnificent statement of his philosophy and one of the most stirringly grand films in recent memory.

Once Kurosawa earned his Oscar for Lifetime Achievement in 1989 (another back-handed award from the “Academy” – they had never awarded a Kurosawa film one of their golden bowling trophies), the Japanese realized that he was, indeed, a National Living Treasure (an honor bestowed by the Japanese government on certain [elderly] artists whose work is thereafter subsidized but whose earnings are also the sole property of the government). He managed to make three more films before old age and ill health forced him into grudging retirement. Dreams, Rhapsody in August (1991), and Madadayo (1993) – the last having never been released theatrically in the U.S. – were personal, meditative films, artistically free but controlled, somehow chastened.

One Kurosawa film, The Lower Depths (1957) is by far the most consistently underrated. (Some of the more obtuse film reference guides have even labelled Kurosawa’s film a “remake” of Jean Renoir’s Les Bas-fonds [1936].)  After his first Shakespeare adaptation, Throne of Blood (1957), Kurosawa felt emboldened to attempt an adaptation of Maxim Gorky’s play, and it is a major achievement.

Of all Kurosawa’s “transpositions” (which include The Idiot [1951], Throne of Blood, High and Low [1963] and Ran), The Lower Depths is the most effective. The reason for this is simple: it is not nearly as ambitious in scope.. The Idiot is misguidedly over-literal; High and Low ultimately (but brilliantly) fails to turn a potboiler into an apocalyptic modern parable; the Shakespeare adaptations (Throne of Blood and Ran) – though strikingly grand – sometimes teeter from the daunting effort of replacing the missing poetry with suitably vivid imagery. 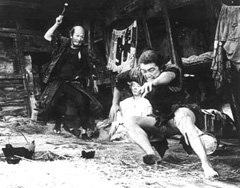 With The Lower Depths, Kurosawa found a way to accomplish what had defeated many distinguished filmmakers – namely, how to transpose a stage play to film without betraying either medium. Set entirely within the narrow precincts of a hovel at the bottom of a ravine, with only fleeting glimpses of the world of light above (from the opening shots, he seems determined to illustrate the title literally), Kurosawa fearlessly confounds the charge of “staginess” by constantly shifting perspectives, by exploiting his customary use of multiple cameras with a seamless encirclement of the action, subtly intercutting alternating views of a clearly continuous dramatic tableau. Shooting in just three days after 40 days of rehearsals, Kurosawa challenged his splendid ensemble of actors not only with prolonged takes but with an engagement of the action, an unpredictable shuttling between camera angles, which kept them all off balance as to exactly where to focus their performance.

Gorky’s play presents a Dostoevskian milieu of downtrodden humanity in a deceptive Chekhovian style. The characters spend all their time either longing for escape – for an undefined, far away “better life” – or else deriding such longing as futile and illusory. Alcohol, which the Actor admits has “poisoned” him, is the only escape for them, and the last scene, in which the remaining tenants (denizens) drink sake and perform an exhuberant musical number without instruments – only their voices –, ends abruptly with the news of the Actor’s suicide. “Idiot!” the gambler grumbles. “He did it to spoil the fun!”

Not surprisingly, the film’s general reception was nearly unanimously one of incomprehension. And although its reputation has improved through the decades, thanks largely to Donald Richie,  it remains underappreciated. Critics who are anxious to pigeonhole a filmmaker’s work have a hard time finding the right slot for The Lower Depths. Like its maker, it defies categorization.

YOU CAN WATCH THIS: Akira Kurosawa Movies

You can find out more about which cookies we are using or switch them off in settings.

This website uses cookies so that we can provide you with the best user experience possible. Cookie information is stored in your browser and performs functions such as recognising you when you return to our website and helping our team to understand which sections of the website you find most interesting and useful.

Strictly Necessary Cookie should be enabled at all times so that we can save your preferences for cookie settings.

If you disable this cookie, we will not be able to save your preferences. This means that every time you visit this website you will need to enable or disable cookies again.